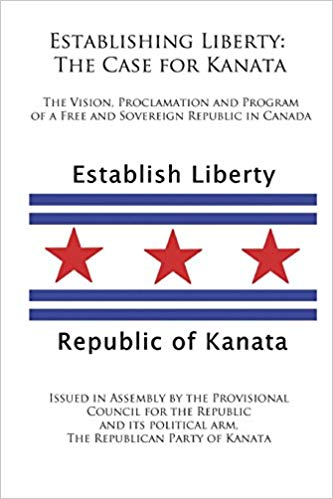 Voting in Canada is Treason:

Itâs Time to Take Back our Nation!

Voting in Canada is Treason:

It’s Time to Take Back our Nation!

This fall, you will be asked to use a ballot to sign away your sovereign authority to a criminal foreign monarch: the so-called Queen of England. Your rulers call this “democracy”. We call it slavery - and an act of treason.

Every Member of Parliament elected must take an Oath of Allegiance to “Queen Elizabeth the Second and her descendants” - not to you or to the laws of Canada. Rather than accountable representatives of your will, you will be electing the sworn servants of a “Crown” that is guilty of centuries of genocide, corruption, theft and fraud against all of the peoples of Canada.  Why hand over your power to such a tyranny?

Canadians are awakening to this wrong. A recent opinion poll showed that nearly 60% of you want to end ties with the British Crown and establish a sovereign Republic in Canada. On January 15, 2015, patriots across our nation acted on that majority mandate and established the legal and political basis for such a Republic. You can now live under the freedom and sovereign jurisdiction of that new nation, which is arising in every region of Canada.

Take the first step towards such liberty by refusing to vote in the fall  election for the corrupt regime in Ottawa. Instead, cast your ballot for the Republic through our alternative voting system and pledge your citizenship to a truly democratic Republic of Kanata under common law. Across Canada, the Republic is creating Peoples’ Assemblies through which you can actively return power to the people through a grassroots Constitutional democracy.

Create a future for yourselves and your children by reclaiming our nation!

Issued by the Provisional Council for the Republic of Kanata and its political arm, the Republican Party of Kanata, on July 1, 2019

Read our Vision and Program, “Establishing Liberty: The Case for the Republic of Kanata” at https://www.amazon.com/dp/1721282033

And listen to our public voice, Here We Stand, every Sunday at 3 pm pacific, 6 pm eastern at https://bbsradio.com/herewestand