Pope Francis, Jorge Bergoglio, to be removed before February 23-24; Ninth Circle sacrificial cult to meet in Rome that weekend 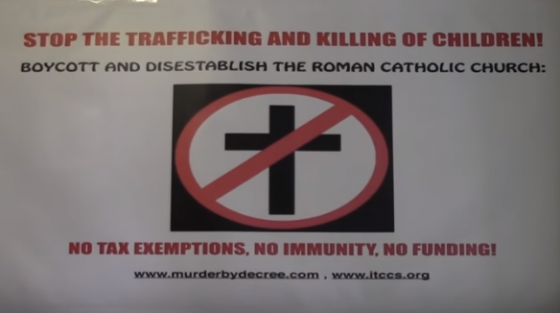 Issued by the International Tribunal of Crimes of Church and State (ITCCS)
January 12, 2019

Breaking News:
Pope Francis, Jorge Bergoglio, to be removed before February 23-24;
Ninth Circle child sacrificial cult to gather in Rome that weekend
Issued by the International Tribunal of Crimes of Church and State (ITCCS)
January 12, 2019
https://youtu.be/9WnoC2Wsgds
Rome:
A confidential source within the Vatican has alerted the ITCCS that the present pope, Jorge Bergoglio, will be removed from his office by a "palace coup" instigated by top leaders of the Ninth Circle, a four hundred year old child sacrificial cult within the Roman Catholic Church. His removal will occur before the weekend of February 23-24, when the Ninth Circle will be holding a coven and child sacrificial ritual at the San Lorenzo Jesuit church in Rome.
Traditionally the Ninth Circle, established by the Jesuits, has played a prominent role in the choosing and induction of every new pope, and will likely have nominated Bergoglio's successor before the February ceremony.
An indication of the imminent fall of Bergoglio is his recent failed attempt to gather support for himself among Catholic Bishops around the world. His order to all of the Bishops to meet at a special conclave in Rome in early January was ignored by over half of them, the boycott being especially prominent in America. "No pontiff has ever faced such open rejection by his own clergy" said the Vatican source. "Many of the Bishops know his days are numbered."
Significantly, the Cardinal who was responsible for the attempted conclave of Bishops, Marc Ouellet of Canada, is a convicted member of the Ninth Circle who participated in Circle rituals at the San Lorenzo church in Rome and at Marie Reine du Monde Cathedral in Montreal, during 2014 and 2015. In the opinion of the Vatican source, "Cardinal Ouellet is working hard to undermine Francis and no doubt sabotaged the conclave. Francis has had a visible relationship with Ninth Circle rituals in Argentina and across Europe. The Circle wants a less conspicuous person wearing the papal crown".
In related news, Cardinal Ouellet's presence has now been confirmed at a Ninth Circle ritual that took place at Holy Rosary Cathedral in Vancouver on midnight of December 21, 2018. Ouellet is a prominent member of the Circle's west coast affiliate known as The Twelve Mile Club: a child sacrificial network that operates out of the elite Vancouver Club at 915 West Hastings street and involves top judges, politicians, corporate directors and RCMP officers.
In December 2018, two members of the Twelve Mile Club on Vancouver Island, United Church ministers Foster Freed and Phil Spencer, issued a "Cease and Desist" order against ITCCS Field Secretary Kevin Annett. The attempted gag order came in response to Annett's efforts to convene a West Coast Common Law Court investigation into the Twelve Mile Club. Freed and Spencer were instrumental in the original firing and blacklisting of Annett from the United Church between 1995 and 1997, and in the destruction of evidence concerning the ritual murder of aboriginal children at their church's Alberni Indian residential school.
Finally, Kevin Annett's popular blog radio program "Here We Stand" will resume broadcasting on Sunday, February 3, not January 13 as originally planned. As of February 3, the show can be listened to every Sunday 3 pm pacific, 6 pm eastern and 11 pm GMT.
More updates are forthcoming.
https://youtu.be/9WnoC2Wsgds
Issued by the Central Office of the ITCCS
12 January, 2019

See the evidence of genocide in Canada and globally at http://murderbydecree.com. Donate to Kevin's work at:
https://www.patreon.com/kevindanielannett
Kevin's books can be ordered here:

Establishing Liberty: The Case for the Republic of Kanata
https://www.amazon.com/dp/1721282033