A Free Inquiry and Commentary

Published without copyright or illusions every Wednesday

What’s good for Albert is Good for You: Notes on a Junkie Nation

Albert Bourla has an appropriately panoramic view of the Hudson River from his palatial mansion in Scarsdale, New York. For on his lofty summit and as the self-described “savior” of mankind, Pfizer Pharmaceutical's CEO has made a deal with a certain Prince in return for all the power of the world.

Some of that arrangement was revealed this past week, when in a candid TV interview, Mr. Bourla pontifically announced that his company’s so-called covid vaccination will henceforth be required on an annual basis, and probably more often than that. The Dark Prince and the drug oligarch’s shareholders couldn’t be happier.

The sky is truly no limit when Beelzebub is on the job, allowing a lowly veterinarian from Thessalonica, Greece to climb to the height of Big Pharma’s corporate dung heap and its subservient governments. But Albert Bourla is just the latest scab on a dead and dying Body Politic being sucked dry by his Master. It should surprise no thinking soul that the Land of the Fee and the Home of the Depraved is now run by history’s biggest drug dealers, posing as public officials. But it’s not exactly an original act.

Back when opium was the drug of manufactured choice, America’s richest families like the Duponts and Harrimans became that way by profiting off the suffering and death of millions of addicts. In the mid-19th century, one third of the British Empire’s wealth came from the Chinese opium trade, the securing of which through two bloody wars allowed Queen Vicky to wander her vast estates in the company of her very own Highland stud. So, let’s not snub our noses at junkies, people. They’ve made our civilization what it is today.

Al (“The Pusher”) Bourla can thank his lucky stars tonight that the Biden administration is scrambling to make his statement come true. Already the White House’s stable of groomed scientists are predicting new and somehow-foreseen waves of the “covid virus” that will return after winter and will require annual or even monthly “booster shots”. The fact that the only thing that will get boosted is Pfizer’s megaprofits is becoming too obvious and banal, even for those encumbered with the official three second memory.

As for the 2024 American election, Trumpers should step out of their own addiction-induced haze for a moment and remember that Albert Bourla is a loyal mega-funder of the Republican Party and an admitted “good friend” of Donny Boy.

Clearly, the fault, dear friends, lies not in our stars but in ourselves. So how else other than by going cold turkey from the entire arrangement can we undo our overmedicated dependency on a government and an economy of the oligarchs, by the oligarchs and for the oligarchs?

The Big Lie Sprouts in Kamloops: Welcome to the 215 Club!

I think it was Joseph Goebbels who observed that a film camera was a better tool than a shovel with which to conceal a murder weapon. Joe’s heirs in the Canadian government are proving him right. This past week, Ottawa’s not-so Bright Boys announced they’re shooting a “documentary film” on the scene of their own homegrown crime, the misnamed Kamloops Indian residential school.

And where the hell is Kamloops? my American readers may ask. Well, the city is tucked snugly between the mountains of central “British Columbia” in a pretty valley where children and evidence have conveniently gone missing for a long time.

Kamloops was the scene of some of the most horrendous crimes by Church and State in Canadian history, including murderous drug testing experiments on children by the Catholic Church and their Big Pharma partners Pfizer and GlaxoSmithKline. But all that’s being scrubbed clean these days, ever since the killers “discovered” a mass grave of children that yours truly has been talking about since the summer of 1998.

We call it the “215 Club” up here in the Great White North. That’s the official number of little corpses who the people responsible for them are now saying died in the Kamloops “school”. Not known for their intellectual or political acumen, the RCMP (who imprisoned and buried the Kamloops children) have announced they’re finally “investigating” themselves, with the same finesse as Al Capone launching an inquiry into all the corpses strewn about his fair city.

Comic relief aside, the “215 Club” is nothing less than the time-honored method of official obfuscation employed by every blood-soaked ruler since Nero. Everywhere you go now in Canada you see “Remember the 215” signs across our oh-so-politically-correct Canaduh. But whatever happened to the 60,000 and more children who were killed by starvation, violence, and torture in those residential school death camps? They’re down the memory hole, as George Orwell would say, as was our twenty-year public campaign that forced this genocide into the open.

How high can an official lie climb? There seems to be no limit in the land that gave rise to this classic joke:

Question: How do you get Canadians to jump into a vat of acid?

Answer: Easy. Just tell them to.

Personally, I’m not holding my breath and will do nothing to constrain my nausea when the Kamloops “documentary” is unleashed on a blithely self-stupefied Canadian public. But of course, I am half-American.

The Great Melting Pot Principle is alive and well in my old skid row neighborhood of Vancouver’s Downtown Eastside, namely that “Everything on the bottom gets burnt, and the scum rises to the top.” But Frank Ermineskin is an exception.

The other day on the corner of Main and Hastings street where Frank sits like an exiled chieftain, we were engaging in our friendly repartee acquired from a friendship that spans two decades. He glanced coolly with his aged Cree eyes at a gang of Vancouver’s Less-Than-Finest who were assaulting and handcuffing another homeless Indian man.

“Bloody cops” he declared, a just-rolled dube hanging grimly out of his mouth. And then, disregarding his joint, he angrily yelled across the street,

“Hey assholes, you get over here! I want to talk to you!”

One of the policemen turned to look at us while his colleagues continued to beat up the Indian.

“You heard me!” Frank yelled again. “Cut out that shit now!”

The cop looked gleeful as he answered Frank’s challenge, and no doubt with visions of busted heads dancing in whatever grey matter he possessed, he strode towards us. I recognized him: he was not one of the groomed tourist cops but a paunchy goon known for his hatred of natives.

“You got somethin’ to say to me, limp dick?” he screamed at Frank as he towered over him.

“I said it already” the Cree man said matter of factly, lighting up his joint. “Just leave that guy alone. Do you get off on kickin’ the shit out of us?”

The cop glanced at me suspiciously.

“Absolutely” I answered with a smile. “My name’s Kevin Annett.”

I extended my hand, but he replied,

“I know who you are, dipstick”.

He turned back to Frank.

“I could haul your ass in again, you know” his Lardship announced to the Indian.

“But what would that do besides gettin’ you your quota?” asked Frank. “It’s not going to fix anything down here and you know it, man.”

His words seemed to deflate the cop, who for the first time looked confused.

“Look, we all know the score" continued Frank laconically. "The Triad gang’s taken over and they’re payin’ you guys to run out us small time dealers. And you’re told by the city to let the crime spread down here so the property values will crash and their Chinese developer buddies can buy up this whole neighbourhood cheap. Do you like being a whore?”

The policeman was dumbfounded.

“Sorry” added Frank. “I shouldn’t have called you a whore. That would insult the girls down here who gotta sell their tails to survive. You don’t have to do this shit. You could try helpin’ my brother here and me change things for the better.”

I couldn’t restrain myself at that point. I let out a laugh. The cop looked at me and seeing that I didn’t mean it at his expense, he smiled and let out a slight chuckle.

“Okay, smart guy” said the cop to Frank and walked back across the street to his colleagues. A few minutes later, they uncuffed their target and walked away, through the mounds of garbage, rigs and stumbling souls inhabiting east Hastings Street. Before he vanished, the cop who had confronted us turned and nodded to us.

Note: To subscribe to this weekly column at no charge please write to angelfire101@protonmail.com . 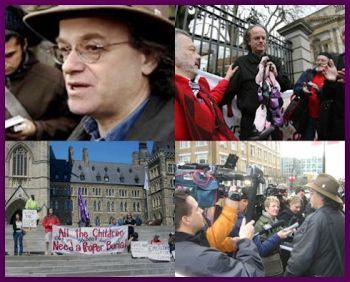