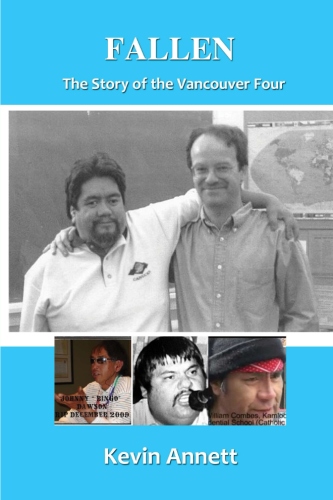 Kevin Annett's Latest book - Fallen: The Story of the Vancouver Four
Now Available through Amazon and Createspace
To order: www.createspace.com/7263374

Now Available through Amazon and Createspace:

To order: www.createspace.com/7263374
List Price: $14.95
Release Date: June 21, 2017
​Fallen is a personal recollection and reflection concerning the lives of four men known to the author, all of whom died. The four characters were survivors of the notorious "Indian residential schools" of Canada and lived in the poverty-stricken downtown east side of Vancouver. The author came to know them intimately as they shared their stories with him and helped to publicly expose the horrors of the state and church-run residential schools.
​Fallen is the human face of Canada's ongoing genocide, written with heart-felt pathos.The characters present a mystery that is never resolved and yet accentuates whatever humanity remains to us: the capacity for the unlikeliest of people to endure alone against unspeakable odds with nothing on their side save themselves. And having found that endurance they become more than victims amidst the usual woe called history. They rise above a lost world and demonstrate something better.
Fallen is a light shone upon the unthinkable and those who dare to uncover it. It is also the author's final tribute to four forgotten heroes who will never bear an official epitaph because of the danger they still represent to killers in high places. But the fact that they stood up, and that someone still recalls them, is miracle and redemption enough.
This is Kevin Annett's twelfth book. He is a renowned Canadian whistle blower and Nobel Peace Prize Nominee who has led the global campaign to expose and prosecute crimes against humanity by church and state. Order Fallen through this email or at www.createspace.com/7263374, anytime on or after June 21, 2017.
Fallen
Vancouver Four
Indian Residential School
Unspeakable Odds
Canada's genocide
final tribute
Forgotten Heroes
Miracle and Redemption