IT'S SOPHISTICATED - Possibilities 184 from Mark Susnow 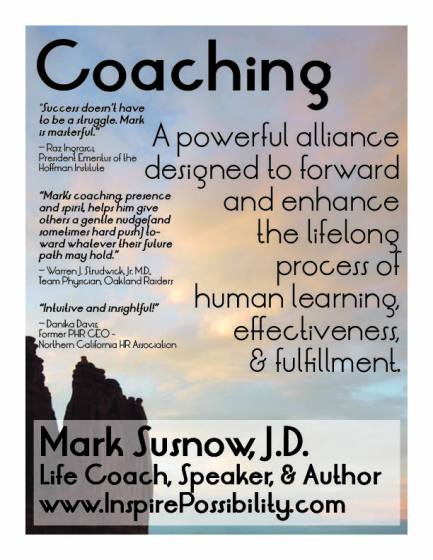 A few weeks ago I participated in the Sports, Energy and Consciousness festival at Dominican University. The intention of the weekend was to expand upon some of the principals learned in sports and use them as a metaphor for living.

IT'S SOPHISTICATED
There's a part of you that always remains a child, no matter how mature you get, how sophisticated or weary.
Barbara Streisand
A few weeks ago I participated in the Sports, Energy and Consciousness festival at Dominican University. The intention of the weekend was to expand upon some of the principals learned in sports and use them as a metaphor for living.
The conference began with the wisdom of Steve Kerr ( 3 Time Head Coach of the NBA world champion Golden State Warriors), when we were reminded of his 4 core principals of creating a championship mindset. Which include joy, mindfulness, compassion and competition.
All principals to live by. We know them all, but do we live by them?
A few things about competitiveness--It is the drive that moves us to excel and to keep us going even in the face of adversity.
I was planning to play tennis the next morning with the regular weekend warriors from the local courts before attending the festival in the afternoon. Before heading for the courts, i scanned the online schedule and shifted plans. I decided to attend the Flow by Choice Not By Chance workshop which was about to begin in 30 minutes at the Dominican tennis courts.
For a few minutes I listened to Scott Ford, a former tennis pro, talk about his discovery of getting in the zone. He asked us to visualize in front of us, a glass window, the size of your wing-span. Rather than focusing on keeping your eye on the ball, which sometimes can hit 100MPH, focus on making contact and connecting with the ball, before it hits the window, for then it will be too late.
I got to practice what Scott said. The next thing I knew I was hitting the ball with Chad Stoloff, the tennis coach at Northern Colorado University, integrating this new method almost immediately into my stroke.
I was in a flow, smiling, feeling the joy.
Whether in sports, playing music or sometimes just in the everyday flow of my life, I've had this feeling before, but i never knew when it would be, or for how long.
When I commented to Chad how simple and effortless it seemed, he replied, "It's Sophisticated." I let him know that I had never thought of sophisticated as being equated with simplicity and effortlessness.
Then he reminded me of something Leonardo da Vinci had once said,
Simplicity is the Ultimate Sophistication
I started imagining what it be like if I could integrate this new way of being, the simplicity, the effortlessness into the rest of my life.
Throughout most of my journey I have trusted my intuition and quite often have found that when I do there is less confusion....no explanations or rationalizations needed.
Before I came to this realization, many words and phrases and complex explanations were used to help resolve some of the more important decisions in my life.
Beneath the chatter of my mind, the answer was always there.
It's really simple. Let go of the things that don't matter. And as Leonardo and Chad would say, It's Sophisticated.
When you are in the zone you don't have to explain it....you intuitively know what to say or not to say, or what to do or not to do.
Nothing fancy or is it?
There is no better time than NOW to enjoy this great adventure, this great mystery called LIFE.
Thank you for being part of the Inspire Possibility Community during these past years, and I hope you will encourage those in your circle to also become part of the Community. If you haven't done so already, become a fan of Inspire Possibility on Facebook.
You can also tune into the Inspire Possibility radio show on the BBS Network. The show is also syndicated on most major podcasts. Take a Listen. There are over 100 conversations with some amazing people. Please subscribe to it on ITunes or just go to your podcast app on your smart phone and do a search for the inspire possibility show.
You know I love to hear from you. Feel free to share Possibilities with those in your circle. Until then,
Walk in Freedom
Mark
"I don't believe people are looking for the meaning of life as much as they are looking for the experience of being alive." Joseph Campbell

Get to Know Mark as he discusses one of our greatest personal challenges. Click here.

If you are curious to find out how Mark can make a difference in your life both personally and professionally, you are invited to contact him
Possibilities
Mark Susnow
It's Complicated