Crime Scene? What Crime Scene?": The On again, Off again Coverage of Mass Graves of Children in Canada - An Open Letter to Jill Macyshon, CTV News Winnipeg, and to the Canadian media 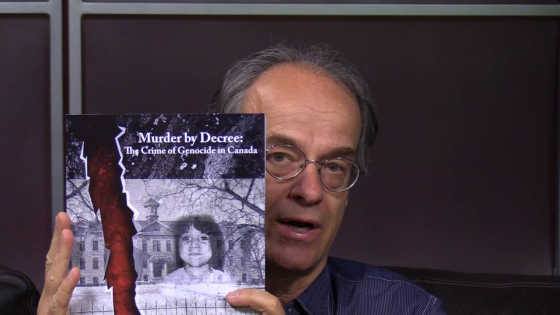 Crime Scene. What Crime Scene. The On again Off again Coverage of Mass Graves of Children in Canada. An Open Letter to Jill Macyshon CTV News Winnipeg
Summary

The On again, Off again Coverage of Mass Graves of Children in Canada

An Open Letter to Jill Macyshon, CTV News Winnipeg, and to the Canadian media from Kevin D. Annett, M.A., M.Div.

(Author of "Murder by Decree: The Crime of Genocide in Canada, Past and Present: A Counter Report to the 'Truth and Reconciliation Commission' ", 2016)

The On again, Off again Coverage of Mass Graves of Children in Canada

An Open Letter to Jill Macyshon, CTV News Winnipeg, and to the Canadian media

(Author of "Murder by Decree: The Crime of Genocide in Canada, Past and Present: A Counter Report to the 'Truth and Reconciliation Commission' ", 2016)

I see that dead Indian children are briefly in vogue again.

It's been over a decade now since I released to your news agency, and to all of the Canadian media and public officialdom, a detailed list of 28 documented mass grave sites at or near to former Indian residential schools across Canada. None of you cared to respond at the time, no doubt because the official "fix" by the Canadian government and churches of their home grown genocide was not yet firmly in place. But now that those perpetrators have morally absolved and legally indemnified themselves from any consequences for their century-long slaughter of more than 50,000 children, and are even funding and directing the official "investigation" into themselves through their misnamed "Truth and Reconciliation Commission" (TRC), I see from your recent news coverage that it's considered safe and permissible for you folks to tepidly address the issue.

I'm referring of course to your August 31 reporting of the "discovery" of an apparent mass grave of residential school children by a TRC researcher named Anne Lindsay – whom I've never heard of – near to the former United Church school in Brandon, Manitoba: along with the Portage la Prairie facility, one of the more notorious killing centers that is documented in my research and by such eyewitnesses as Peter Yellowquill and Chief Louis Daniels. (See 14:07 at https://www.youtube.com/watch?v=OPKFk_L7y9g and murderbydecree.com )

The intrepid Ms. Lindsay has apparently found children between the ages of seven and sixteen in the ground near an RV Park a few miles from the former Brandon "school". One wonders how she can poke around a crime scene and pull out remains, let alone figure out their ages, without the cops saying anything. You don't mention this little issue of legality in your article, any more than you quote an accurate figure of the level of death in these facilities: not the Holocaust-denying "3200 deaths" (or less than 3%) cited by the TRC, but the documented 40-60% death rate (or more than 50,000 dead) displayed in government documents as far back as 1907.

Like Ms. Lindsay, your news coverage avoids the basic question of how such a grave can be located, let alone unearthed, without the police immediately declaring it to be a crime scene and conducting a forensic investigation into the human remains to establish their identities, cause of death and who is responsible. This little matter is never addressed, presumably because when it comes to dead little Indians in Canada who died at official hands, a different standard of law applies.

Of course, silly me, we know who's responsible for all those corpses: the very institutions paying Ms. Lindsay to dig around, locate and ship off their dirty laundry. But the fact remains that the TRC, and its government and church sponsors, is once again engaged in a huge obstruction of justice and a criminal act by destroying a crime scene and crucial evidence regarding their own Crime against Humanity: the biggest and most concealed group felony in Canadian history.

If you bone up on international law, Jill, you might notice that powers responsible for committing domestic war crimes and mass murder are prohibited from conducting their own inquiries or reparation agreements with survivors, as Canada has so blatantly done. It's like the serial killer stacking the jury and bribing his victims into silence. The fact that Canada and the Roman Catholic, Anglican and United Church have been able to do so and flout that law and every standard of humanity in concealing their crimes is thanks to the active collusion of not only other nations – as one United Nations official told me in 1999, "All our countries did those kind of crimes. Who wants to open that can of worms?" - but of the less than courageous and hardly independent Canadian media, as is evident in your August 31 report.

None of this surprises me, because it is the pattern of duplicity, criminality and self-exculpation for which Canada and its churches, and media buddies, are so notorious. But in every Group Crime there is an eventual accounting, even when the perpetrators are still in charge. The impending fall of yet another Pope for actively concealing and engaging in child trafficking within the Church of Rome is evidence of this, and of the adage that even the most protected criminal can run but they can't hide.

Perhaps it's pointless, but the hard evidence that I and a few others have brought to light, against the stream for a quarter century, that proves the guilt and liability of Canada and its churches, is available to you and to any media outlet that will finally report the real story of our home grown Genocide, and of how it continues. Of course, doing so will cause you to risk losing your CRTC accreditation by the very government guilty of these crimes. Let's just say I'm not holding my breath.

Meanwhile, the children who were raped, starved, tortured and battered to death and thrown into unmarked graves still cry out for a hearing, and for their still-breathing killers to be brought to justice. But anyone with a heart and a mind knows that.

The Naked Emperor of Canadian Church and State are that way because their clothes are soiled and blood stained. It's strange how the media are so convinced that such a monarch is legitimately attired. Perhaps the CTV will lead the way in changing this Big Lie by not believing and spreading the serial killers' account of their crimes anymore. The truth, and any notion of justice, lies elsewhere. 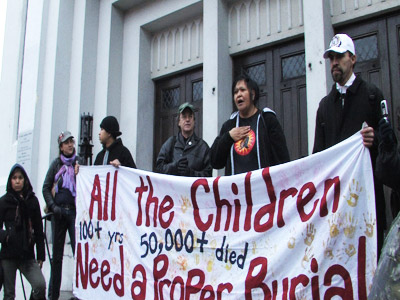