Creating Liberty throughout the Land: The Republic of Kanata 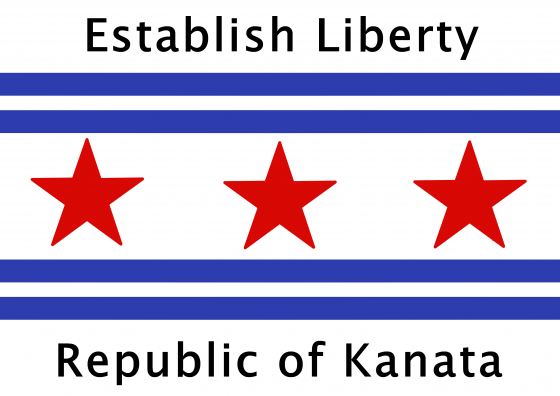 Creating Liberty throughout the Land: The Republic of Kanata
Summary

Creating Liberty throughout the Land: The Republic of Kanata

Creating Liberty throughout the Land: The Republic of Kanata
​
The centuries-old dream of a sovereign, free Republic in Canada is coming to
life. Patriots from all of our founding nations have gathered in assembly and
launched a movement to take back the wealth and the land for all of the
people by establishing local self-governance and liberty across Canada.
The time has ended when a few corporations and an aged monarch in London
can own all of the lands and resources of our country while millions of our
people are trapped in poverty. The criminal foreign regime known as “the
Crown” has no right to rule or exploit our country. It must be replaced by a free
Republic based on the common law, equality and personal liberty.
Our new Republic will cancel income tax and all foreign and private debts. All
of our tax money will remain in our own communities, where the people will
practice direct democracy through locally elected Peoples' Assemblies. The
Law and the courts will be placed in the hands of We the People. And a national
Congress will give the vote to every citizen sixteen years and older, and may be
recalled by a majority of the people.
You can make this dream a reality today. For as a pledged Citizen of the
Republic of Kanata, you will be granted free access to public transit and
medical care anywhere in Canada, under the common law Right of Reparations
from the criminal regime called “the Crown”. And you can speak and vote in
local Republican Assemblies and make the laws that will govern yourselves.
Now is the time to reclaim the freedom and the land stolen from you. Help us
establish our new nation at its grassroots. Take the Pledge to the Republic, join
the Republican Party of Kanata and help make Canada the land of liberty it was
meant to be.
For more information about the Republican Council nearest to you, and to receive a copy of our book and founding program Establishing Liberty: The Case for Kanata, see www.createspace.com/8644242
or contact the Republican movement at republicofkanata@gmail.com.
And listen to the Voice of the Republic: Here We Stand (formerly Radio Free Kanata), broadcast every Sunday at 3 pm pacific, 6 pm eastern at https://bbsradio.com/herewestand.
Issued by the The Republican Party of Kanata and the Provisional Council for the Republic For Sovereignty, Self-Government and Liberty
PLEASE DOWNLOAD THE LEAFLET AND PASS IT AROUND!
Creating Liberty
The Republic of Kanata
Sovereign
free Republic
Patriots
establishing local self-governance
monarch
trapped in poverty
criminal foreign regime
the crown