Coming soon to the airwaves: Late Night with God, or Mr. Bergoglio Goes to Rome: A Tragic-Comedy set on the Seven Heads of the Beast 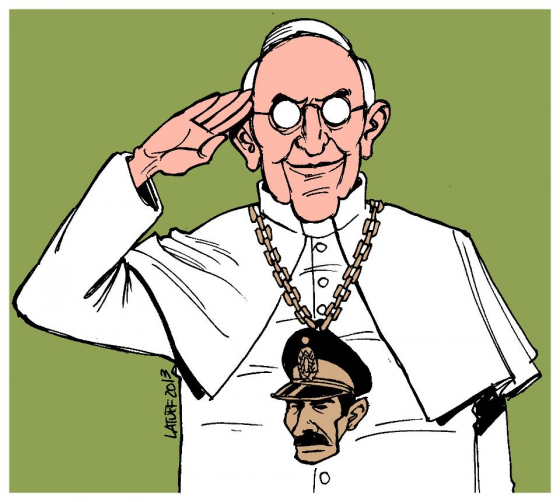 Coming soon to the airwaves: Late Night with God, or Mr. Bergoglio Goes to Rome: A Tragic-Comedy set on the Seven Heads of the Beast
Summary

Late Night with God, or Mr. Bergoglio Goes to Rome:

A Tragic-Comedy set on the Seven Heads of the Beast

Late Night with God, or Mr. Bergoglio Goes to Rome:

A Tragic-Comedy set on the Seven Heads of the Beast

Voice: And stop fiddling with that pathetic schlong of yours!

Jorge: Who is this?

Voice: (mimicking) “Who is this?” I’ll give you three guesses.

Jorge: Am I under arrest?

Jorge: Well, I'm trying. (pause) Is it really you?

Jorge: Oh! Well, I have always tried to welcome our lost Jewish brethren into the faith …

Voice: Save the speeches, amigo. We've got to talk.

Voice: Christ, I thought you Jesuits were on the ball. (pause) Look, it’s about your cash flow problem.

Voice: You’re insolvent, Jorge, and you’re fucking up our operations. I’m thinking of calling in your debts and shutting you down.

Jorge: But, Lord, that’s not necessary! Just yesterday the Chinese offered to settle our Zurich accounts …

Voice: Chicken feed. You’ll still owe me billions, and I want my money now. Now, Jorge, and not at the fucking end times.

Jorge: Well, our armament deals are up, Lord, with our expansion into the anti personnel mines market. And our partners in Beretta say that small arms sales never looked better …

Voice: Do you need a hearing aid, old man? I said I want full payment now!

Jorge: No, I hear you, O great One! But give us a chance! (pause) Look, I can close all those orphanages and schools, and sell off more of the Vatican Museum!

Jorge: (desperately) Okay, I’ve got it! I’ll announce a global plenary indulgence like the one I just did in Ireland! I’ll double the cost for a special papal dispensation! Three hundred Euros to buy your way into eternal grace! The dumb bastards always lap that shit up!

Voice: Look, Jorge, think outside the box for a minute. Try to see things from my perspective.

Voice: Who the fuck is talking about praying? I’m talking reality. Dollars and cents. The stuff the faith runs on.

Voice: I’ve got plans in the works and I need a trillion bucks, right now. But all I’m getting from your Vatican Bank morons is excuses and headlines.

Jorge: These are uncertain times, Magnificence.

Voice: No shit. And we both know what you little jerk offs do when the times get hard, don’t we, Jorge? Your own Bishops are starting to resign en masse. And just last week, another one of your cardinals got grabbed smuggling money out of Italy!

Voice: Save it for the reporters, schmuck. I don’t care how many Chinese politicians and Mafia goombahs you’re in bed with! All your rats are jumping ship, and I want my money before it leaks away to some offshore account in Macao …

Voice: Just don’t try conning me, Jorge. I’ve got my eyes and ears everywhere. Even in Bejing.

Voice: So talk to me.

Jorge: Well, we could take out another mortgage on Vatican City …

Jorge: (giggling) You should be around here when the septic tanks back up. Whew! Madre de dios!

Voice: This ain’t getting us anywhere. I want to talk to your accountants.

Jorge: Oh. (nervous pause) Well, I don’t know where they are exactly …

Jorge: No, no, what I meant was, uh, I think they’re all asleep, Lord. It’s after midnight here, you know.

Jorge: Anyway, we don’t need to bring them into this.

Voice: Are you playing games with me, asshole? You remember what happened to the last pope who tried dicking me outta my money?

Jorge: Yes, Lord. I sure do remember.

Voice: You little weasels think you’re such hot stuff once you put on that clown’s hat! I made you and I can break you, asshole! So you put the accountants on the line right now, unless you want to see the bottom of the Adriatic in a cement swimsuit! (pause) Or maybe I’ll let slip those really cute photos of you and those three choir boys in Buenos Aires …

Jorge: (alarmed) No Lord! Please, that’s not necessary! I’ll call the accountants, just like you want!

Voice: Get off your fucking infallible knees, Jorge. And stop pissing yourself. Your corpse wouldn’t be worth the hassle of another conclave. (pause) Look, forget about the bean counters. I know you’re a man who can get things done once you stop bullshitting everybody. Speaking of which, General Videla said to say hi. He’s still a big fan of yours.

Jorge: Really? How is old tight ass, Lord? If you don’t mind me asking?

Voice: Loving the good life up here, naturally. No more bleeding heart human rights groups to deal with. What can I say?

Jorge: Give him my best, will you, Lord?

Voice: No need to, Jorge. He’s forever in debt to you for those Exocet missiles.

Jorge: Oh, that was nothing … just a matter of transferring some funds from Rome …

Voice: I love it when you get all humble like that, Jorge. You do the performance so well. (pause) And speaking of lame dicks, how is Rat Boy doing? You guys feeding him okay?

Voice: Oh, wow. Now that’ll be gripping reading. (pause) Look, Ratzinger may be a murderous little creep but he’s still one of us, so if he gets hassled with any more of those extradition orders or arrest warrants, you let me know, okay? Nobody messes with my boys.

Jorge: He’ll be happy to hear that, mighty one. He’s having nightmares of lawyers scaling the Vatican walls …

Voice: (firmly) Look, stay on agenda, Jorge. Let’s get back to my money. (pause) You’ve got exactly 48 hours to get me what I need. One trillion dollars.

Voice: (outraged) Alright, that did it! Armageddon, right now!

Jorge: Yes Lord! It’s just my, uh, manner to joke like that. (nervous pause) Look, would I lie to you?

Jorge: Yes Lord. I’ll do whatever it takes to get you your money: even if we have to soak every believer and put them into perpetual debt and ruin.

Voice: Oh, and another thing, Jorge … about all those protests in Vatican square.

Voice: I don’t like it. Very bad for the image. Our offshore investors are edgy enough, as it is.

Voice: Who the hell are they, anyway? The ones with the picket signs?

Jorge: Malcontents, Lord. Something about being rape victims …

Voice: Rape? You gotta be kidding me!

Voice: So what? That's no sin. What's their problem?

Jorge: I don't know exactly, Eminence. But we have to appear to be understanding and receptive …

Voice: Well, I’ll leave the spin doctoring to you, Jorge. You’re the old master. That’s why I picked you.

Voice: Stop preening. (pause) Child rape eh? Jesus Christ in a pickup! Next thing we’ll hear about will be all those dead Indians …

Jorge: Well, Lord, now that you mention it …

Voice: Holy shit. I don’t want to deal with that, too. You get our buddies over at Langley to handle the savages. It’s their specialty.

Jorge: Already done, sir. The CIA are being their usual helpful selves.

Voice: Maybe you’re not so bad after all, Bergy.

Jorge: Why thank you, Lord. It’s nice to be appreciated. And our media strategy seems to be working in that regard, if the polls mean anything.

Voice: (giggles) Yeah, I saw that Time magazine article about you. Makes you look like the fucking Second Coming! Imagine! Little Georgie Bergoglio the Argentine fixer, an overnight saint! (laughs, pause) Hell, I knew it would work. The kindly grandfather pope cleans up shop after Joe the Rat checks out.

Jorge: Brilliant, sir, as always. I guess it is true, that you can fool all of the people all of the time.

Voice: Well, in the Church of Rome, at least.

Jorge: But Lord, if you don’t mind, there is one final thing that’s bothering me.

Voice: What is it?

Jorge: What do we do when Jesus comes back?

Voice: We’re working on it. 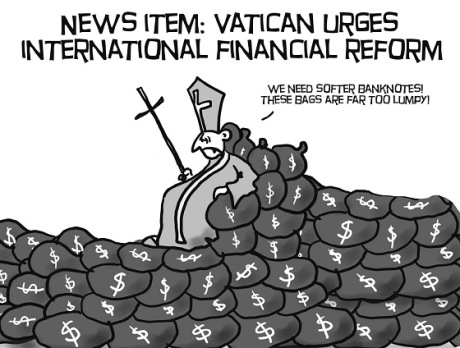