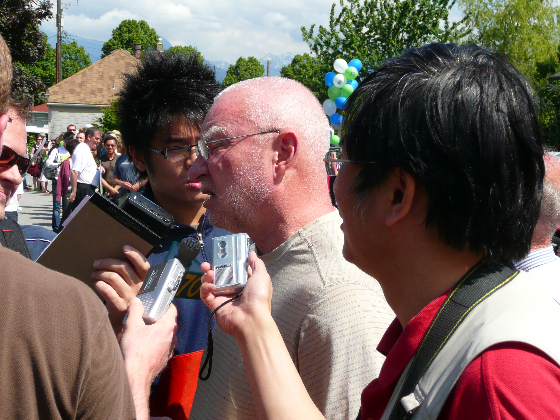 Canadian Senator Larry Campbell is Summoned to Appear before Genocide Tribunal -
Serial killer Willie Pickton, CSIS operative, former prostitute also issued Summons
https://youtu.be/fT6k6KSMxAw
Thursday, July 11, 2019
Ottawa and Vancouver:
A prominent Canadian Senator, Larry Campbell, has been issued a Summons to Appear before a September 16 Genocide Tribunal in Vancouver. The Summons is being delivered today to Campbell's office in Ottawa by the International Tribunal for the Disappeared of Canada (ITDC), which has also summoned Prime Minister Justin Trudeau and twenty other officials.
Senator Larry Campbell is a former RCMP officer, Mayor and Chief Coroner of Vancouver. He was appointed to the Canadian Senate by Prime Minister Paul Martin in August of 2005. Paul Martin himself is on a "third party" list of people who may be summoned to appear before the Tribunal.
Three other individuals have also been Summoned by the Tribunal to give testimony in relation to Campbell's appearance: convicted serial killer Willie Pickton, an unnamed former operative of the Canadian Security Intelligence Service (CSIS), and a former Vancouver prostitute.
According to ITDC spokeswoman Ellen Bradbury-Dufort,
"Senator Campbell has been asked to appear before our Tribunal to answer questions regarding his knowledge of missing and murdered aboriginal women in the Greater Vancouver area. These questions will include the issue of the alleged complicity of RCMP, government and church officials in the abduction, ritual torture, killing and disposal of these and other women."
When asked about why three other individuals are being summoned in relation to Campbell's subpoena, Bradbury-Dufort said,
"All of these people have relevant testimony regarding Senator Campbell and the murder of aboriginal women in British Columbia. If Campbell and they are indicted by the Tribunal that testimony will become a matter of public record."
A complete background on the September 16 Tribunal in Vancouver, as well as breaking news from the ITDC, can be found under "ITCCS Updates" at http://murderbydecree.com. Regular updates will be announced every Sunday at 3 pm pacific, 6 pm eastern time on the program "Here We Stand", found at https://bbsradio.com/herewestand .
Issued by The International Tribunal for the Disappeared of Canada (ITDC)
Thursday, July 11, 2019
disappearedofcanada@gmail.com
https://youtu.be/fT6k6KSMxAw

The International Tribunal for the Disappeared of Canada (ITDC) is an international coalition of jurists and human rights groups.The ITDC was formed in September of 2018 with the aim of investigating the disappearance of aboriginal people in Canada and prosecuting those responsible. The ITDC arose because of continued efforts by the Canadian government to subvert justice by concealing and falsifying the truth of the genocide of native people in Canada, both past and present. The ITDC has three Canadian field offices in Vancouver, Winnipeg and Toronto, and is connected to a central Brussels office at itccsoffice@gmail.com . Its Canadian headquarters can be contacted at disappearedofcanada@gmail.com .

See the evidence of genocide in Canada and globally at http://murderbydecree.com.