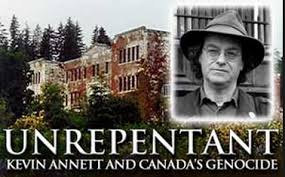 “The problem with a mass delusion is that, by definition, only the heretics know when we are living through one.” – Michael Scott Fontaine

One of the most meaningful Christmas stories that I have ever read came from my friend from Vancouver, Canada, Reverend Kevin Annett. His story is titled “Nativity” and is printed further below.

The “little matter of genocide”, about which the United States of America shares considerable guilt, is the century-long history of abuse, rape and murder of tens of thousands of Canada’s aboriginal children in church-run Indian residential schools (known as mission schools in the US), a subject on which Kevin is an acknowledged world expert. See murderbydecree.com for more information

The last Christmas we were all together hangs over memory like the fog did that year in the Alberni valley. It was a time of gathering, two years and more of labor summoning so many together where once there were but a few. And it was a time of ending.

The church stewards had warned me to expect an overflow crowd at the Christmas Eve service, and like overgrown elves they had busied themselves around the building, stringing wires and sound systems in the cold auditorium kept that way to save money. The snows had come early, and our food bank was already depleted.

With my eldest daughter who was but five, I had walked to the church one morning in the week before yule, pondering the cold and the sermon, when I met the one who would pierce the fog that year for us. She stood patiently at the locked door, her brown eyes relaxing as we approached. Her bare hand gestured at me.

“You’re that minister, ain’t you?” she mumbled to me, as daughter Clare fell back and grabbed my hand.

Before I could answer, the stranger smiled and nodded, and uttered with noticeable pleasure at her double entendre,

“They say you give it out seven days a week!”

I smiled too, gripping Clare’s hand reassuringly and replying, “If you mean food, we’re a bit short, but you’re welcome to whatever’s left.”

She nodded again, and waited while I unlocked the door and picked up Clare, who was clinging to me by then.

The basement was even more frigid than the outside, but the woman doffed her torn overcoat and sighed loudly as we approached the food bank locker.

“For all the good it’ll do …” she said, as I unlocked the pantry and surveyed the few cans and bags lying there.

I turned and really looked at her for the first time. She was younger than she had sounded, but a dark, cancerous growth marred her upper lip, and a deep scar ran down her face and neck. Her eyes were kindness, and in that way, very aboriginal.

“I’m sorry there’s not more …” I began, since back then I still saw things in terms of giving. But she shook her head, and instead of saying anything, she looked at Clare, and the two of them exchanged a smile for the first time.

I stared, confused, at the cupboard so bare, and heard her finally utter,

“Them people in church, you know what they need?”

I set Clare down and shook my head.

“They need Him. They sing about Him, and pretend they know Him, but hell, they wouldn’t spot Him even if He came and bit ‘em on their ass.”

I smiled at that one, and even dared a mild chuckle.

“You doin’ a Christmas play for the kids?” she continued.

“I bet it’s the usual bullshit with angels and shepherds, right?”

“That don’t mean nuthin’ to those people. Why don’t you do a story about … well, like, if He came to Port Alberni to be born, right now?”

I finally laughed, feeling very happy. She smiled too, walked over to the cupboard and picked up a small bag of rice. Donning her coat, she nodded her thanks, and said,

“My bet is Him and Mary and Joseph, they’d end up in the Petrocan garage, down River road. The owner there lets us sleep in the back sometimes.”

And then she was gone.

I didn’t try explaining the stranger to anyone, ever, or what her words had done to me. All I did was lock the food cupboard and lead Clare up to my office, where I cranked up the heat and set her to drawing. And then I sat at my desk and I wrote for the rest of the day.

The kids in church were no problem at all. They got it, immediately. The Indians who dared to mingle in the pews that night with all the ponderous white people also took to the amateur performance like they had composed it themselves, and laughed with familiarity as the holy family was turned away first by the local cops, and then hotel owners, and finally by church after church after church.

It was mostly the official Christians who were shocked into open-mouthed incredulity at the coming to life of something they thought they knew all about. As the children spoke their lines, I swear I saw parishioners jump and writhe like there were tacks scattered on the pews.

“Joe, I’m getting ready to have this kid. You’d better find us a place real friggin' quick.”

“I’m trying, Mary, but Jehovah! Nobody will answer their door! I guess it’s ‘cause we’re low lifes.”

“Look! There’s a church up ahead. I bet they’ll help us!”

If you believe the Bible, whoever He was loved to poke fun at his listeners and shock them out of their fog, and our play would have made him proud. As the eight-year old girl who played Mary pleaded fruitlessly for help from a kid adorned in oversized clerical garb, and was covered in scorn by the young “priest”, I heard a sad moan rise from the congregation.

But things took a turn when Mary and Joseph came upon an Indian, played by one of the aboriginal kids.

“Sure!” replied the native kid with gusto. “I got a spot in a shed behind the gas station down the road. The owner lets us all sleep in there!”

And in a contrived scene of boxes and cans scattered where our communion table normally stood, Mary had her baby, as erstwhile homeless men with fake beards and a stray Rez dog looked on, and one of the witnesses urged Mary to keep her newborn quiet lest the Mounties hear his cries and bust everyone for vagrancy.

Voices were subdued that night in the church hall over coffee, cookies and Christmas punch, and the normally dull gazes and banalities about the time of year were oddly absent. The Indians kept nodding and smiling at me, saying little, and not having to; and the kids were happy too, still in costume and playing with the local stray who had posed as the Rez dog in the performance that would always be talked about. It was the white congregants who seemed most pregnant that night, but they couldn’t speak of it.

It was one of my last services with them, and somehow they all knew it, since we had all entered the story by then. For a churchly Herod had already heard a rumor, and dispatched assassins to stop a birth, and me, even though it was already too late.

My daughter Clare was not running and rolling with the other kids, but in her manner joined me quietly with her younger sister Elinor in tow. Our trio stood there, amidst the thoughtful looks and unspoken love, and person after person came to us and grasped our hands, or embraced us with glistening eyes. An aging Dutch woman named Omma van Beek struggled towards me in her walker and pressed her trembling lips on my cheek, and said something to me in her native tongue as the tears fell unashamedly from both of us.

Later, when we were scattered and lost, I would remember that moment like no other, as if something in Omma’s tears washed away all the filth and loss that were to follow. And perhaps that looming nightfall touched my heart just then, for I gave a shudder as I looked at my children, almost glimpsing the coming divorce, and I held my daughters close as if that would keep them safe and near to me forever.

The snow was falling again as we left the darkened building, kissing us gently like it had done years before when as a baby, Clare had struggled with me on a toboggan through the deep drifts of my first charge in Pierson, Manitoba, on another Christmas Eve. The quiet flakes blessed us with memory, and settled in love on the whole of creation, even on the unmarked graves of children up at the old Indian residential school.

The old Byzantine icon depicts Jesus as a baby, hugging his worried mother while she stares ahead into his bloody future: her eyes turned in grief to the viewer, yet his loving eyes seeking her, past the moment, past even his own death.

The image may still hang in the basement of my church, where I left it.

Dr. Kohls is a retired physician who practiced holistic, non-drug, mental health care for the last decade of his family practice career. He now writes a weekly column for the Reader Weekly, an alternative newsweekly published in Duluth, Minnesota, USA. 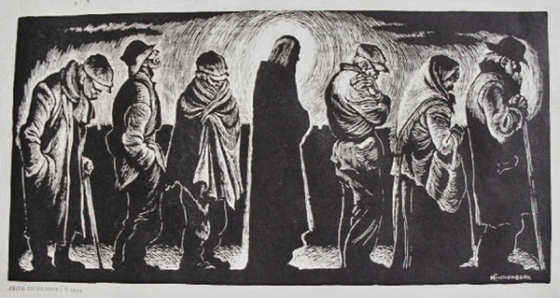