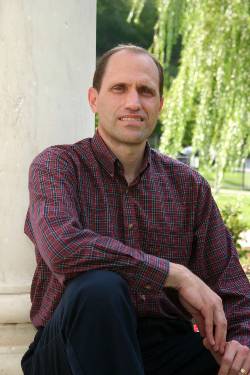 Since May, 2002, Sterling Allan has been running the best exotic free energy technology news, directory, and networking service worldwide.

Pure Energy Systems (PES) Network, of which he is CEO, is the premier news, directory, and networking service whose mission is to find and facilitate the best exotic free energy technologies. In May, 2012, Sterling founded the New Energy Systems Trust to help bring these technologies to market.

PES is aided by the New Energy Congress, which Sterling founded in 2005 as an association of energy professionals from around the world who review the most promising claims to existing and up-and-coming breakthrough energy technologies that are clean, renewable, affordable, reliable, easy to implement, safe, and legitimate. From this ongoing review, they generated a Top 100 Clean Energy Technologies listing. More recently, they shifted their focus to "exotic" modalities, emphasizing the Top 5. They also endeavor to facilitate the emergence of some of the more promising exotic technologies into the marketplace.

Sterling has made the term "free energy" more acceptable by relating it to solar, wind, geothermal, and other well-understood technologies; while also making the more exotic approaches not seem so crazy.

Prior to his focused involvement in free energy over the past eight years, Sterling was an activist in promoting principles of freedom and defending them against forces conspiring to establish world tyranny. For example, he spearheaded the "Draft Ron Paul for President in 2004" signature campaign. When Paul declined, Sterling threw his own hat in that ring.

He is presently involved in launching an intentional community, Safe Haven Villages, featuring sustainable building and growing methods and utilizing renewable energy. Sterling's graduate studies at BYU and the University of Arizona were in Bioelectrochemisty, studying the interaction between external electrical stimuli and physiological systems.

Sterling is the founder of a dozen-plus organizations whose functions range from preparedness and alternative religious and political thinking; to defining, teaching and researching better ways to live as a society. He has proven experience in creating, managing and sustaining organizations, as well as in using websites as a way to teach, publish and disseminate information.

He is frequently invited to speak on radio shows and at conferences.