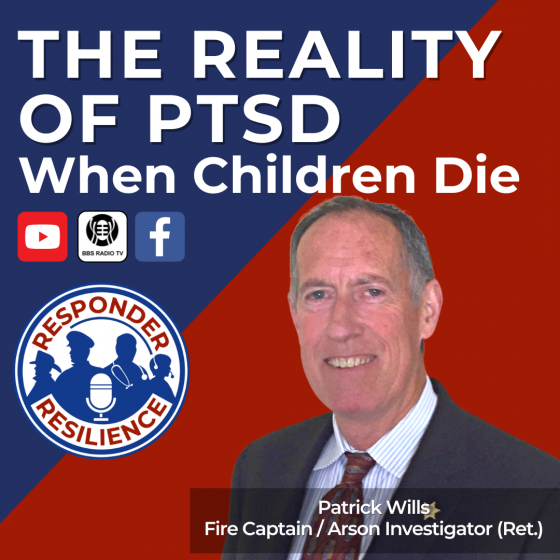 Throughout his 46 year career as a Fire Captain and Investigator, Patrick Wills had seen more than his share of trauma and death, but it wasn’t until he responded to a tragic fire that claimed the lives of three young sisters that he unknowingly descended into total PTSD.

David and guest host Kim O’Neill speak with Pat, a veteran of the Long Beach Fire Department, as he shares the emotional toll of the death of three young sisters who died while sleeping inside an illegal garage residence that caught fire. He details the complex fire and death investigation procedures and shares the emotional impact faced by dispatchers, firefighters, paramedics, and law enforcement who responded that night.

First responders are expected to hide their emotions and deal with these tragic situations, sometimes daily. How do they learn to cope, and move on after witnessing the results of such a tragic event?  "The Reality of PTSD When Children Die" is the story of a tragic, preventable fire that took the lives of three young children in the city of Long Beach, CA. It is also the story of Captain Pat Wills, a fire investigator that responded to the call, his personal struggle with such tragedy; and how he made it back to the real world thanks to a police psychologist who took the time to ask a very basic question.

Patrick Wills is a 46-year fire service and law enforcement professional, serving as fire Captain/Investigator, with the Long Beach Fire Department, including 17 years as supervising investigator of the ATF Arson Unit. Wills was also involved in hundreds of arrests of adult and juvenile arson suspects, as well as testifying in state and federal courts as an expert witness.