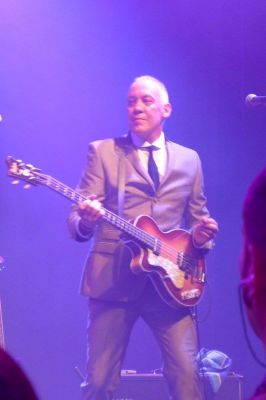 I got into Bass after having an acoustic guitar for about a year but realizing I’d never be as good as I hoped, though I still play 6 string electric and acoustic for my own pleasure at home.

My childhood heroes were the usual Glam Rock and pop acts of the 70’s as seen on Top of the Pops every Thursday, but in my mid teens I really got into 60’s music and 50’s Rock n Roll.

I adored The Beatles and being a left handed guitarist  my idol was Paul McCartney, so I decided to get a Bass.

I managed to get a decent left handed one, but struggled with theory and music books and after about 6 months I was getting no joy or pleasure from playing and sold it back to the same music shop I had bought it from. About a week later I regretted it and promptly bought it back.

This time I concentrated on combining what music knowledge I’d gained from learning acoustic guitar, and then matching it with what a bass actually did and how it worked with drums and melody and rhythm and just started playing along to early Beatles records.

Once I’d discovered how a walking bassline works in Rock n Roll, I was playing along with as many records I could lay my hands on . This time I actually had fun instead of sat around in an empty bedroom trying to work out incomprehensible theory and being baffled by tutor books that were way above my head.

The first songs I ever mastered were From me to You and Heartbreak Hotel...Not bad choices eh?  Once I understood how and why the bass was doing what it was doing, I was away and discovered I could actually play.

In my very late teens, I was obsessed with joining a band, and a long long journey began.

I was in quite a few original ‘ Indie ‘ type bands as we all kept up the dream of trying to get a record deal, it never happened, but I had loads of fun and learned so much about how bands work, gigging experience, what works and what doesn’t.

I can’t remember how many gigs or bands I was in during my Twenties. But it was a lot, the friendships I made then lead to me being introduced to Colin in 1995 and our first tentative rehearsals.

I immediately knew this was a band that was not only great fun but had a no nonsense attitude to getting things right and it was clear that with a frontman like Colin, this was going to be a far bigger commitment and experience than the bands I’d previously been in.

And so it proved to be for many years.  I had the greatest time ever, travelling the absolute length and breadth of the UK every weekend, playing gigs and to audiences I’d never dreamed of before, having lots of laughs and making life long friends.

I’m so glad the band is back and up and running again and it feels right that we grow old disgracefully together where we belong...On stage!

I’ve had the pleasure of being in one of the resident bands at the Cavern Club for the last eleven years too and until the Pandemic I was busier than I’ve ever been as a working musician. I really hope those days return again soon.

I guess I’ve played over 3,500 gigs in my time … A heck of a lot and though they’re all just a blur, hopefully many many more still to come.

I’ve been extremely lucky to play in many countries, both with Colin and the Cavern band, Liverpool Beat ..The ones I can remember.... The USA, Bahrain, Norway, Greece, Germany, Spain, Denmark, Holland, Hungary, Belgium...erm.. Wales.

I’ve also been lucky to play bass for a lot of famous singers and musicians, but by far the biggest thrill and the nicest man I’ve ever met was to be in James Burton’s band for one night a few years ago. What an absolute gentleman he is.

My music tastes are so varied these days . I try to listen to as much new music as I can, but my heart will always be in Rock n Roll. I think it’s what I do best as a bass player. I love writing songs, have a small studio at home. But my heart is in live music. Let’s bring it back soon with Colin and the lads.