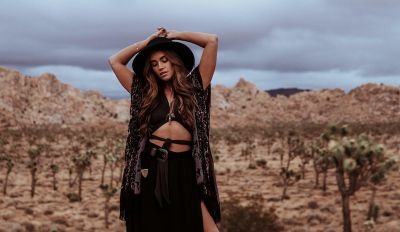 Folk/Americana singer-songwriter Tara Kelly is putting a new spin on the cosmic country of Kacey Musgraves and Emmylou Harris, with a songwriting style that evokes a darker, more mysterious edge.

Hailing from a rural town in southern New Jersey, Tara Kelly moved to Los Angeles to write and perform, securing a show at the iconic Troubadour venue. Shortly after, Kelly was personally invited by Rhett Miller of Old 97’s to sing his hit duet “Fireflies” with him on a stop in Los Angeles after posting a cover of the song on her Instagram.

Kelly’s sound is deeply influenced by cosmic American music, fathered by Gram Parsons in the late 1960s and popularized by the likes of Linda Ronstadt and Brandi Carlile. She also draws inspiration from bands like Fleet Foxes, The Civil Wars, and Mandolin Orange; while her songwriting is shaped by the word-play of Kacey Musgraves, the raw vulnerability of James Bay, and the unabashed and fierce-feminine power of Maren Morris. Her lyrics allegorize a gamut of lived experience from heartache to mental health awareness, creating modern folklore that is all her own.