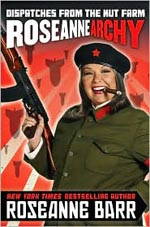 Roseanne Cherrie Barr (born November 3, 1952) is an American actress, comedienne, writer, television producer, director and 2012 presidential nominee of the California-based Peace and Freedom Party. Barr began her career in stand-up comedy at clubs before gaining fame for her role in the sitcom Roseanne. The show was a hit and lasted nine seasons, from 1988 to 1997. She won both an Emmy Award and a Golden Globe Award for Best Actress for her work on the show. Barr had crafted a "fierce working-class domestic goddess" persona in the eight years preceding her sitcom and wanted to do a realistic show about a strong mother who was not a victim of patriarchal consumerism.[1]

The granddaughter of immigrants from Europe and Russia, Barr was the oldest of four children in a working-class Jewish Salt Lake City family; she was also active in the LDS Church. In 1974 she married Bill Pentland, with whom she had three children, before divorcing in 1990 and marrying comedian Tom Arnold for four years. Controversy arose when she sang "The Star-Spangled Banner" off-key at a 1990 nationally aired baseball game, followed by grabbing her crotch and spitting.

After her sitcom ended, she launched her own talk show, The Roseanne Show, which aired from 1998 to 2000. In 2005, she returned to stand-up comedy with a world tour. In 2011, she starred in an unscripted TV show, Roseanne's Nuts, that lasted from July to September of that year, about her life on a Hawaiian farm.