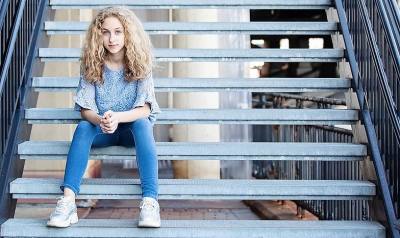 Leandra Dielle Gruft is a young emerging performer from Chicago, Illinois. Her performance experience includes Musical Theatre, Dance, and Film and Television. She has performed the roles of Cinderella and Rapunzel in Into the Woods and Alice in Alice in Wonderland.

Leandra has also performed numerous recitals throughout Chicago. Her repertoire performed includes excerpts from Matilda, Annie, Oliver, Les Miserables and numerous other shows. As part of her training at the School of Rock, she sang as a soloist in Billy Joel Experience and Jimi Hendrix Experience.

She recently filmed an independent short film in The Other Foot, as the role of Mary.  Her other on-screen work includes commercials for Party City aired on ABC. Leandra has also trained in Jazz dance for five years, and Two years with Joffrey Ballet in Jazz, Ballet, and Modern, including a year of jazz with alvin ailey Company member Riccardo Battaglia.

She also spent few years with Academy of Music and Art studying Hip Hop, Tap Dancing, and Musical Theater as well as Ballet and Jazz. She has studied acting at Second City as well as Acting Studio Chicago. In Addition to studying at Second City and Acting Studio Chicago  she studied in the audition only Musical Theater Conservatory program at New Music School with Scott Ramsay and Erin Elizabeth Smith.