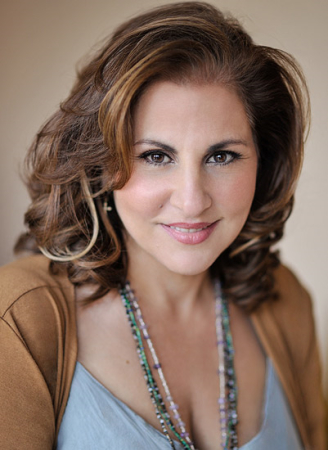 Kathy is very proud to have been voted Ms Magazine's’ “Woman of the Year 2005.”

For 14 seasons Kathy provided the voice of “Peggy Hill,” on the Emmy award winning FOX TV hit King of the Hill, (Annie award and 2 Women In Film awards) and for 3 seasons she performed opposite Kirstie Alley as “Olive” on NBC's Veronica’s Closet, (American Comedy Award.) Najimy is known internationally for her portrayal of “Sister Mary Patrick” in the blockbuster hits Sister Acts 1 and 2, (ACA Awards, and Hollywood Press discovery of the Year Award). Kathy was heard in Pixar’s Oscar winning hit Wall-E, and in Disney’s: Tinkerbell. Kathy starred on Broadway and was critically acclaimed for her portrayal of Mae West in Dirty Blonde (outer critics award) - and also appeared on Broadway in the first productions of V DAY (the Vagina Monologues) -- Her original Off-Broadway hit: play The Kathy and Mo Show: Parallel Lives and The Dark Side garnered her and Mo Obie Awards and Cable Ace awards for both the plays & the HBO specials. The Complete Kathy and Mo Show: disc DVD can currently be found on Amazon.com. In 2008 Kathy starred as series regular, Millie Finch the saucy head of the University on the CBS hour drama—Numb3rs.

As well, as the Sister Act movies, Kathy has appeared in over 20 films including a starring role in Hocus Pocus and RatRace, Hope Floats, Nevada, Cats Don’t Dance, Zack And Reba, This Is My Life, The Fisher King, Say Uncle, (best actress Philadelphia Film fest) Soapdish, and The Hard Way, and Step Up 3D, with cameo appearances in It's Pat, The Wedding Planner, Jeffrey, The Big K and Margaret Cho's: Bam Bam and Celeste, and 2 Sisters.

For television, Najimy received critical acclaim for her 3-part arc on Chicago Hope, Disneys’The Scream Team, FOX’s TV special Cinderelmo, and with Tim Curry she performed the opening musical number of the 1995 Academy Awards. She starred in - In Search Of Dr. Seuss as well as appearances in the TV series: She TV, Fool For Love, Early Edition, Clueless, That's So Raven, and several episodes of Ellen. She is shamefully proud of the gold chip she won as the tournament champion on Celebrity Poker Showdown and the $100,000.00 she won to benefit V-day. And was the final championship winner on CBS’s Game Show Marathon with the 100 thousand Grand prize going to at-risk teen-age girls.

She has directed several projects including an off Broadway musical -Back to Bacharach and David—(which she also created) recently produced in Hollywood to rave reviews. Kathy has also directed several 1 woman shows.

For her 20 years of AIDS activism, she has been honored with the L.A. Shanti’s Founder award as well as the L.A. Gay Center's Distinguished Achievement Award. As a proud Lebanese American Kathy has received awards from the ACC and The ADC .

Kathy has posed twice for PETA's popular campaign, “I’d Rather Go Naked Than Wear Fur,” and in 2000, she received PETA’s Humanitarian of the Year Award from Paul McCartney.

She contributed to the Random House book: The Choices We Made, (released on the anniversary of Roe vs. Wade), and on tape, voiced Wally Lamb's novel-She's Come Undone. She has been the keynote speaker for over 50 humanitarian organizations all across the country.

Kathy lives in NY with her kick ass husband -- actor/singer Dan Finnerty (the Dan Band), their glorious daughter Samia, and their dogs: Petey and Princess.