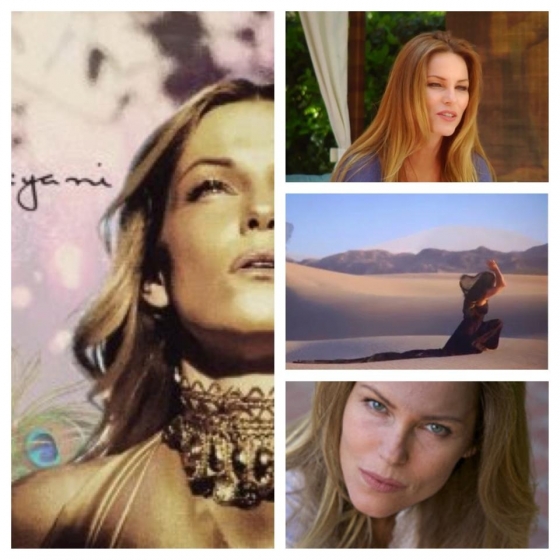 Guest Occupation
Visionary, Artist, Healer, Singer, Producer
Guest Biography
KALIYANI is a spiritually inspired visionary, producer, artist and founder of Stargate Alliance Films & Media whose mission is to inspire humanity though offering alternative visions, information and empowering tools for self, as well as for global soul transformation. It is Kaliyani's dream to offer her Self as an instrument for the betterment of humanity and uplifting of consciousness on the planet. She says her deep heartfelt connection with Source is the driving force and fuel in everything she co-creates and assists in bringing forth.

As New Age/World Music Recording Artist, Kaliyani had recently released her debut single and music video "Nammu's Invocation" she brings to the energetic landscape - wordless intonations of HEIGHTENED VIBRATION! The Debut of her EP - her first inspiring ALBUM is scheduled for release later this Fall 2014.

"Nammu's Invocation" was also featured, May 29th, in the World Premiere of new independent film, A Winter Rose, at the DANCES WITH FILMS festival, Hollywood's Chinese Theater.

Kaliyani's MUSIC features a blend of exotic world music style woven with a new age, elegant, yet complex thread, Kaliyani's evocative vocals are reminiscent of some classical music styles that range from Operatic to Gregorian and are often embedded in a dramatic, contemporary, cinematic orchestration that makes her music deep, luminously rich in structure and unique in its class.

"Singing came to me unexpectedly, revealed itself suddenly, and undeniably demanded my attention," says Kaliyani.
KALIYANI further explains about her music, "They are intonations from the heart I have coined as 'Immanence.'-- It's is a heart-centered intoning language that speaks when words cannot. It's a soul flow. They are pure energetic frequencies, which in their raw potency encode the transmission of the message that's coming through with perfect accuracy, with no need for the "middle" service that words play."

Here are what many of whom have gravitated towards her work EXCLAIMS:

"I had never dreamt of being a singer; it happened because I was broken open and I allowed it to come through. I was deeply inspired by a sense of intimate connection with the Mystery... an archetypal presence that has been dancing with me for the last ten years. In a way I would say this presence found a new access point and form of communication with and through me. Many have asked who is singing with me in the beginning of Nammu's Invocation...as if there was someone else there... In a sense it is true, since I feel a definite presence with me every time." (Unknown)
"Kaliyani is an Angel with a voice that will transform your soul, and take you to a place of brilliant light, and vibrant, full bliss. Her inner and outer beauty is stunning, and her heart is full, and brimming with pure Shakti. Get ready to be moved and lifted by Kaliyani!" says C.C. White, Soul Kirtan singer.
"Kaliyani's music is innovative and passionate, her voice heart-opening," says Thomas Barquee, (noted singer, musician, producer)
"When I first heard Nammu's Invocation, I was swept away by its beauty. Kaliyani's creative artistry reveals hidden wonders and great depths to be explored and absorbed. It is as easy as letting go and letting her music flow over you, lift you and take you on an adventure of heart and imagination. Take flight! Bravo, Kaliyani!" says Leigh J. McCloskey (artist, author, visual philosopher and founder of Olandar Foundation for Emerging Renaissance)
CLICK on the Following LINK for more information on KALIYANI: https://www.youtube.com/watch?v=bvLBGmGnW2Q&noredirect=1