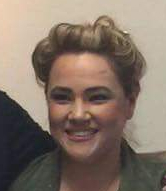 Candy Loya a Californian Native from Downey, Ca. a television host and Actress, Model, writer, Radio Host Personality. Over the Past 3 years Candy has worked in a wide variety of professional capacitates both in the private & public sectors. Candy has earned her AA in Liberal Arts & Communications at Los Angeles Trade Tech in 2014 and she will pursue her education to obtain her Bachelors in Broadcasting Journalism.

Thus Far Candy has worked on various projects such as: 2014-2015 Media Consultant and Journalist Rep for hollywood Productions 2014 LA Talk Radio with Host Cameron Datzker as special Co host 2013 Runway Fashion Model for Designer JVONOHAY LUCCI 2013 Carlos Rojas Movie Premiere Event 2012 Groove G Shack Radio as a Co host Candy Loya Can be summed up into two positive words Happy& Adrenaline Candy's personality and character both bring your everyday interaction to the point where you will not get enough of her and her perky personality or she will make you smile and laugh. With amazing and strong ties to her family and community involvement such as volunteering at the Cerritos charity for Abused Women.

Being a lover of animals as an activist for rescued and abused dogs. Candy's goals and dreams are to write her autobiography about her life tribulations to help inspire others and fight to make it in life. Candy is known by many as a Loving Friend, nurturing mother and Professional and career minded woman ready to face her next Challenge.