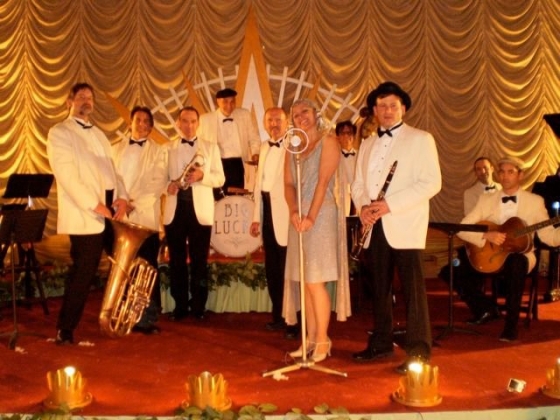 It was a vintage swing night in Hollywood, and the freewheeling, speakeasy spirit of the roaring ‘20s was making the dancers crowd the floor. On the stand, torch songstress Val Peterson was at the mic, singing a tune that would have made the Great Gatsby proud. That’s when he walked in. Paul Frederick: composer, arranger, musician. In his hand, a weathered, black case. In the case, a clarinet.

“Who plays clarinet, anymore?” Peterson thought as she watched Frederick assemble his axe to sit in with the band. “Who sings like that, anymore?” Frederick thought to himself as he put a reed on his horn and listened to Peterson finish a chorus. They nodded at each other, and he started to play. With just a few notes coaxed from the licorice stick, Peterson had her answer.

In such moments bands are born. Call it lucky. Call it Big Lucky…

As fans of classic songwriters and performers – Porter, Berlin, Fitzgerald, Shaw – Peterson and Frederick bonded instantly that night in Hollywood, and Big Lucky was born. From there, they set out to evangelize the greatest music of the past, but with a hipster chic style that’s all their own.

Whether performing as a trio or tearing the roof off with a full, 18-piece orchestra, Big Lucky has been wowing audiences and critics from their native Los Angeles all the way to Paris and Budapest with their unique, retro-lounge swing and glamorous sound.

In 20xx they caught the well-tuned ear of NAME, a vintage and rare Gatsby-era jazz connoisseur who commissioned the band to create their album, “The Venture Capital Follies of 1929.” To summon the speakeasy flavor of the roaring ‘20s, Frederick drew upon his skills as a composer/arranger to create original arrangements for a full dance band while Peterson studied 100s of period recordings to capture just the right sass and flavor.

Critics praised the album’s attention to detail, its superlative sound quality, and the excellent musicianship. The album led to Big Lucky’s first appearance at the famed Biltmore hotel in downtown Los Angeles and guest spots on HBO’s hit shows, “Entourage” and “Curb Your Enthusiasm.”

Recently, the band inked a deal to create original songs with their patented, vintage ‘20s lounge flavor for international music library XYZ. They’re also hard at work recording their follow-up album. “Around the World with Big Lucky.” Blending the band’s love of 1950’s and ‘60’s movie themes, Peterson’s unique ability to sing in five languages, and the virtuoso accordion stylings of Nick Ariondo, the new album promises music fans a whirlwind tour of continental, folk, and gypsy sounds served up ala “martini chic.”

With the finest touring and studio musician in Los Angeles behind them, Peterson and Frederick’s Big Lucky brings the best in jazz, standards, swing, pop, and lounge to discriminating music fans the world over.