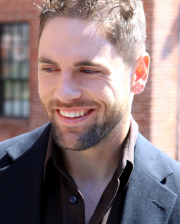 Ben: Stewart, born January 14, 1983 in Seattle, Washington, is a musician, filmmaker and public speaker. He is best known for his three independently released documentary films Esoteric Agenda (2008), Kymatica (2009), and Ungrip (2011). Along with the films, Ben is singer/songwriter for the alternative rock group Hierosonic. The full scope of Ben's work with the films and the band has been called the 'Mecca for all artists and revolutionaries', regarding how his artwork ranges from revealing global conspiracy to examining the depths of consciousness.

Ben's appearance on the 2003 Lollapalooza Music Festival with Hierosonic was pivotal in his outlook at the music industry. This ultimately led to the years of research in all fields which led to his first film, Esoteric Agenda. Less than a year after this free online documentary grew international roots, he then decided to produce a follow up film. Kymatica was released in 2009 and went on to win 'Best Scientific Film' in the 2009 New York Independent Film Festival.

With notable public mentions such as Jesse Carmichael of Maroon 5, Anthony Burulcich of The Bravery, Alex Jones (PrisonPlanet / InfoWars), and Best Selling author Dr. Bruce Lipton, the music and films have sent a 'call to action' to all artists. Jared Gomez of Billboard artist He'd (PE) gave a shout out to Esoteric Agenda at the end of the single 'Stay Ready'. In 2010, Ben Co-produced the single 'Love or Illusion' with hip-hop group BXC in Chris 'Ludicrous' Bridges home studio with his long time producer Josh 'Igloo' Monroy.

As an Army brat, Ben moved with his family in and out of the country before high school. Since then, he has toured nationally with the band several times. At age 17 he enlisted in the U.S. Air Force as a crew chief on the C-130 aircraft. At the 193rd Air Guard unit in Central Pennsylvania, Ben mobilized for real world operations including Operation Enduring Freedom in March of 2003. After completing his six year enlistment, he began his solo world travels to South America, Australia, Canada and Europe for speaking tours as well as vision quests with native tribes in the Amazon rain forest, North American native reservations, and through Australia. Documenting every step of the way, all of his travels developed his thirst for knowledge, experience and art.

'All systems of government, much like the human mind, do not corrupt but become riddled. The trick is not to call the riddle a defect and then condemn it, but to explore it, experience it, embrace it, and eventually outgrow it like an old pair of shoes. That's how an artist approaches a bump in the road. Lord help us if we lose sight of the importance of art culture.' says Ben.