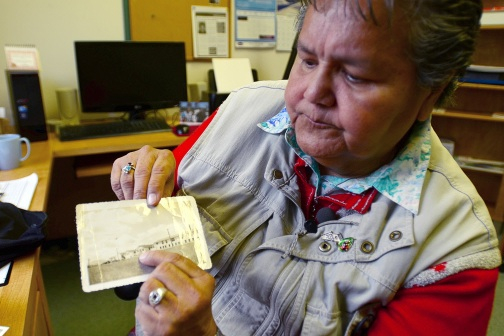 The first attempt to stage a play about medical experimentation on aboriginal children by Canadian church and state has been derailed by two state-funded native politicians with a long history of complicity in genocide.

This past week, “Chiefs” William Seymour and Joe Thorne of the Cowichan Tribal Council instructed local aboriginal people not to participate in or attend casting sessions for the play “Doppelganger” after receiving copies of the script. Thorne also began a smear and disinformation campaign against the play and its author, Kevin Annett, that made many of​ the actors drop away from production. “Doppelganger” was scheduled to play at the Duncan Showroom from September 22-25, 2017.

Both Seymour and Thorne come from families that colluded with the very experiments, tortures and murder of native children depicted in “Doppelganger”. During the 1940′s and 1950′s, Chief Fred Thorne, Joe Thorne’s father, was paid by the Canadian government to track down and return runaway​ children​ to the infamous Kuper Island Catholic residential school​ where many of them died​ . The Seymours also transported children from their own villages to Kuper Island and helped destroy indigenous elders and customs among t​heir tribe in return for being appointed leaders of the state-run Cowichan Tribal Council.

“Once again the colluding aboriginal leaders have suppressed the truth of crimes against their own people. That’s some of what my play reveals as it examines the government mind control experiments at the Nanaimo Indian Hospital and the actions of the protagonist, a United Church doctor named Oliver Pierpoint who is on trial for atrocities against children. Pierpoint is actually an aboriginal who was a victim at the hospital and took on the identity of his torturers, just like Willie Sey​mour and Joe Thorne have done.”

Neither Annett nor his co-producers are discouraged by this setback. They are already arranging​ new ​readings of “Doppelganger” among actors in Vancouver and Toronto, and plan to stage the play in New York and European cities during the fall and spring.​

“We owe this to the thousands of children who never returned from secret experimentation centers across Canada” remarks Annett.

To participate in the production of “Doppelganger” contact the producers at thecommonland@gmail.com and listen this Sunday to Radio Free Kanata at 3 pm pacific on https://bbsradio.com/radiofreekanata.