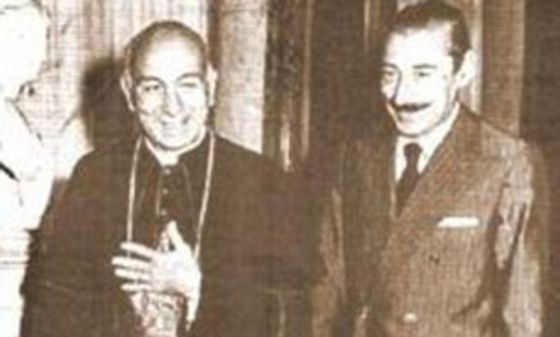 Breaking News from the International Tribunal of Crimes of Church and State (ITCCS)
Friday, December 3, 2021 (GMT)
Pope Francis issues bribes, "silencing orders" to conceal his Dirty Wars crimes and cult ritual involvement - Pope will convene Ninth Circle ceremony in Rome on December 21 involving aboriginal participants, says Vatican insider - International Week of Action to End Vatican Crimes set to begin December 18
https://youtu.be/U5EUgU0DG4o
Jorge Bergoglio (left) with General Jorge Videla, killer of 30,000 Argentines
Rome:
Pope Francis (Jorge Bergoglio) has paid bribes exceeding two hundred thousand Euros to conceal his role in the murder of Argentine citizens and his involvement in cult ritual ceremonies, according to a source within the Vatican's College of Cardinals.
The same source states that Bergoglio has also issued "silencing orders" to the Vatican assassination agency known as Sante Alleanza and its head, Domenico Giani, to destroy eyewitnesses to these crimes, in Argentina, Europe, and Canada. These targeted individuals include journalists, former clergy, indigenous activists, and members of our Tribunal, including Kevin Annett.
According to the Vatican source, over the past five years, Bergoglio has paid to Maxima Zorreguieta, Queen of the Netherlands, a sum of at least 75,000 euros as "hush money". Zorreguieta is a fellow Argentine citizen whose father Jorge, along with Bergoglio, was a member of the inner circle of the military dictatorship that murdered over 30,000 people in Argentina between 1976 and 1983. The Pope also received payments from the Dutch Queen in excess of 128,000 Euros during the same period to conceal the Queen's own complicity in murders in Argentina.
This latest evidence of the Pope's culpability in crime comes in the wake of the issuing of an international arrest warrant against Bergoglio for his command responsibility for the genocide of indigenous children in Canada.  (http://murderbydecree.com/2021/11/01/breaking-global-news-monday-november-1-2021-arrest-order-and-warrant-issued-against-pope-francis-by-international-court-10000-reward-and-amnesty-offered-to-detain-jorge-bergoglio-for/ )
In response, there is a growing opposition to the Pope from Canadian Catholic Bishops and the College of Cardinals in Rome - an opposition that is compelling Bergoglio to take desperate and more incriminating measures.
For, according to the Vatican source, Jorge Bergoglio in his papal capacity will convene a ceremony of the child sacrificial cult known as the Ninth Circle on Wednesday, December 21. It will be held at midnight in the sub-basement crypt of the San Lorenzo Catholic church near to the Vatican.
To quote the source,
"We also have learned that some of the leaders of the aboriginal delegation coming from Canada will be at the ceremony where several children will die, including an aboriginal one. The native chiefs' scheduled visit with the Pope on December 20 is a cover for their participation in the cult, which goes back to their years in Indian residential schools."
First-hand evidence of sacrificial child killings in Canadian Indian residential schools between the years 1929 and 1977 is on file with our Tribunal. Two Dutch eyewitnesses - Toos Neijenhuis and Anne-Marie van Blijenburgh - both observed the present "two popes", Jorge Bergoglio and Joseph Ratzinger, participate in the ritual killing of children at separate Ninth Circle ceremonies in Holland and Belgium, Ratzinger in the spring of 1998 and Bergoglio late in 2009. (http://murderbydecree.com/the-itccs-org-archive/#page-content)
In response, an International Week of Action to End Vatican Crimes - from December 18 to 25 - has been called by traditional indigenous elders in Canada that will see Catholic churches everywhere seized and reclaimed as reparations for genocide.
The same elders have prohibited the aboriginal delegation to Rome from meeting with Pope Francis and called on them "to refuse to help to perpetrate and whitewash the monstrous crimes against our children and all our people ... If the puppet chiefs go to Rome they will be expelled from their respective nations."
For information on how to participate in the Week of Action and for more details of this breaking news, tune in this Sunday December 5 to Here We Stand, 3 pm pacific, 6 pm eastern, 11 pm GMT at www.bbsradio.com/herewestand, or write to angelfire101@protonmail.com .
See www.murderbydecree.com under "ITCCS Updates" for more developments.
https://youtu.be/U5EUgU0DG4o
Issued Friday, December 3, 2021 by the International Tribunal of Crimes of Church and State (ITCCS) and its indigenous affiliates

Listen to Kevin and the Voice of the Republic live every Sunday at 6 pm eastern at https://bbsradio.com/herewestand . The website of the Republic is www.republicofkanata.ca See the evidence of genocide in Canada and globally at www.murderbydecree.com and https://www.youtube.com/watch?v=Rk4g5l7FcFc&list=PLYEnChrKOgm7aRDzbo6yfswzCEdMl2P8e&index=1  and https://www.youtube.com/watch?v=Czej73SfYJc .
Pope
bribes
silencing orders
9th Circle cult
Global protests
Jorge Bergoglio
General Jorge Videla
Killer
Argentines