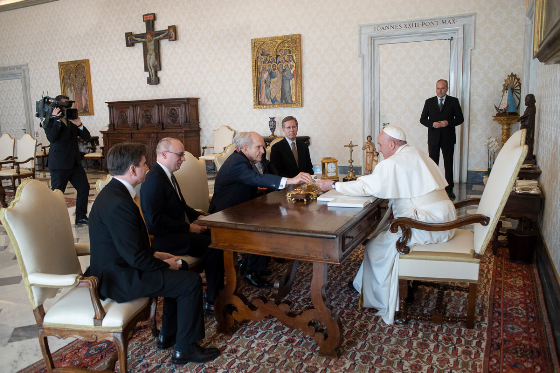 Breaking News Report from the International Tribunal of Crimes of Church and State (ITCCS)
Monday, March 11, 2019
Mormon Leader who met with 'Pope Francis' accused of child rape and cult ritual killings by church insiders - Two year investigation releases explosive testimonies
Rome:
Russell M. Nelson, the leader or "Prophet" of the Mormon Church of Latter Day Saints (LDS), was publicly accused today of heinous crimes against children soon after he and other LDS elders enjoyed a private audience with 'Pope Francis', Jorge Bergoglio. The meeting was part of a three-day dedication ceremony opening a new, expansive Mormon Temple in the suburbs of Rome.
According to a group of LDS church insiders and undercover investigators who have infiltrated the church for the past two years, Russell Nelson has raped, tortured and killed children, performed abortions and killed off his predecessors to assume his present office. According to the affidavit of one witness,
"Russell Nelson may be the Prophet but he is known as 'The Killer'. I know someone who saw him continually rape children as young as five. I know people who were raped by him as children.  When someone's to be killed, Nelson's the one who schedules it and sometimes he performs it, since he's a doctor. He's performed rituals of aborting babies, killing the fetus and cutting it up, eating it, and drinking its blood. I know he performed an abortion on his own niece. He's vile. He was the ring leader of the child trafficking ring in Bountiful, Utah in the 1980's.
"Russell also organized and performed the killing of previous Prophets so he could rise to power.  I know that as a doctor, Russell organized the various stages of poisoning of the Prophets Harold B. Lee in 1974, Spencer W. Kimball in 1985, and Howard W. Hunter in 1995. They were all killed in the church or the church hospital in Salt Lake City."
Another church source confirms this account, and more.
"There was Prophet Ezra Taft Benson. He was also the Agriculture Secretary in the Eisenhower government. Prophet Benson refused to participate in the rituals and he was tortured by Russell Nelson, he operated on his brain so he was not functioning after and so Benson could never speak again until he died in 1994.
"The Catholic church has been connected to the Temple for many years. I know that deadly rituals were held in the Cathedral of the Madeleine, the Catholic church in Salt Lake City. I know that Catholic cardinals have been invited into the Temple secretly and I know that agreements were made there and that children were raped by the Cardinals and the Prophets." (Note: The LDS official newspaper 'Deseret News' confirmed this past week that the Mormon leadership has maintained 'secret and unofficial' ties with the Vatican since the 1950's).
On December 13, 2018, Russell Nelson was named as a witness in a lawsuit brought against his own daughter and son-in-law, who have been charged with involvement in a child abuse ring in Bountiful, Utah. (https://www.fox13now.com/2018/12/13/deposition-of-lds-church-president-sought-in-sex-abuse-lawsuit/) Under Nelson's leadership, the LDS Church has been the subject of continual lawsuits by sexual abuse survivors who have claimed widespread crimes and cover-ups within the Salt Lake City Mormon Temple.
A source in the Vatican reported today that Pope Francis - who was elbowed out of power on February 22 and retains a purely symbolic position in the papacy - made an unprecedented step by even meeting with the Mormon leaders, who represent a "pagan cult, not a Christian body" according to Vatican doctrine. According to the source,
"Pagans are never officially recognized and are certainly never given private audiences. And look where it happened: not in the official reception area, the Pope Paul VI Hall, but in a small office, without any attending Cardinals or security present. This is completely unusual and really unbelievable."
Communications received by the ITCCS this past week suggest that, in the wake of the disruption of yet another Ninth Circle sacrificial ceremony at the San Lorenzo church in Rome on February 23, the Bergoglio-Nelson meeting is part of a transitioning of such ceremonies away from Catholic churches to the new Mormon Temple in Rome. According to the ITCCS investigative team in Salt Lake City,
"The tortures, ritual killings and institutionalized child rape we've documented in the LDS church here bear an exact resemblance to the standard Ninth Circle ceremonial methods found in Vatican facilities. We believe we're looking at the same monster."

The next scheduled Ninth Circle ritual sacrifice in Rome will occur on Good Friday, April 19. ITCCS Sheriffs will continue to disrupt these murderous practices. Stand by for more breaking updates at http://murderbydecree.com and on Sundays at 3 pm pacific, 6 pm eastern, 11 pm GMT at https://bbsradio.com/herewestand