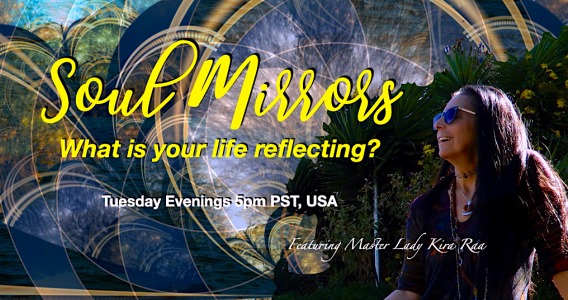 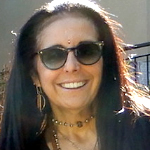 Soul Mirrors! What is your life reflecting?

WAKE UP and travel beyond the illusion! What is the mirror of your life reflecting around you and what does it mean?

Extraordinary guests, from the cutting edge, add depth & dimension to the fascinating conversation.  Be sure to call in early, (lines fill fast), to share your perspective or request one of Kira Raa’s famous mini soul readings! 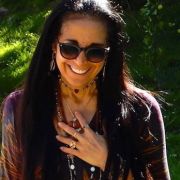 Kira Raa is a well known and highly respected intuitive. Having assisted 1000’s to discover their own mastery through the accuracy and pure stream of energy she emits, she is often referred to as the “teacher’s teacher”. Her journey is inspiring!

A lifelong mystic, Kira Raa was raised in an environment not ready to have an accomplished “seer” in the midst. As a child she assumed everyone saw auras and received messages from those who had crossed over that were seeking to connect with loved ones. She still has early memories giggling in her crib watching her stuffed animals float and then seeing them quickly “fall” whenever anyone would enter the room.

As a young child Kira freely shared what she heard and saw around others. This often banished her to her room to avoid the ramifications that came when her parent's friends would be brought to tears with the messages Kira offered them! By her mid-teens, she was acutely aware that her abilities were not fully appreciated. To avoid being ostracized, she began a descent away from her gifts that would resurface after her first near death experience.

Enjoying early success in the business world, Kira literally “worked herself to death”, and died during uterine cancer surgery in 1989 when to the dismay of her startled doctor her body reanimated after a time of death had been established. It was during this Near Death Experience, (NDE), that she agreed to the mission offered to her from the Ascended Masters. Once her body reanimated, she did not immediately activate her mission and spent another 12 years deep in the drama of worldly energy until she could no longer deny her reason for being!

Shortly after the millennium, Kira fully released her traditional life and surrendered to be of service as agreed during her NDE. It is valuable to note that prior to her stepping into her “second life”, Kira was already a highly acclaimed inspirational speaker, and author of the series, Women, Wellness, Awakenings™. Her early inspirational success led her to be a favorite and repeat guest of many network TV and radio talk shows, including Good Morning America.

During this timeframe, she was a successful entrepreneur and owner of one of the largest Woman Owned insurance agencies in the United States. She was a sought after keynote speaker for the Colorado Dept. of Revenue, S.C.O.R.E., and NAWBO, among many others. Always “ahead of her time”, she graduated high school a full year early at the top of her class and completed her college studies at age 19 to pursue her career.

Wildly artistic, and filled with love for all creatures, Kira is also a gourmet vegetarian chef and shares her love of the life experience with all who come in contact with her.

Kira Raa has dedicated her life to the recognition of the mastery within each of us! She has been gifted through the blessing of the Archangels and the Ascended Masters to assist any and all, “to know, to remember, to celebrate being on this planet at this moment in history.”

For over 17 years Kira Raa has steadfastly lived the Yoga of Self-Ascension in Sacred Union with her beloved partner, Sri Ram Kaa. Their commitment to the Art of Ascended Living beautifully demonstrates that anyone with a sincere heart can break free and live a life of Miracle Presence.