President Obama to award George H.W. Bush the Presidential Medal of Freedom 17 Nov 2010 President Obama dropped a bipartisan bombshell today, announcing he will award the Presidential Medal of Freedom next year to ex-President George H.W. Bush. The magnanimous gesture of bestowing the nation’s highest civilian honor to the 41st U.S. President came a day after ex-President [sic] George W. Bush gave a respectful nod to Obama at the groundbreaking of his library in Dallas. [Mega barf alert *and* gag me with a chainsaw! Primary Obusha in 2012!] 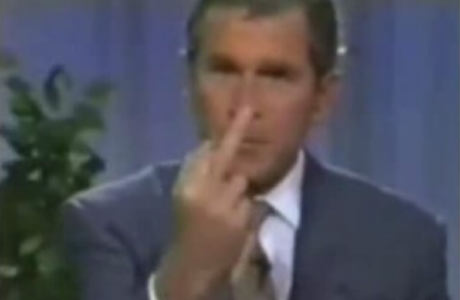 Re: Bend Over America! *PIC*

View this short video and then slap yourself silly! (until someone, ANYONE, wakes up) *LINK*

Disobedience Is The True Foundation Of Liberty *LINK*

To be repeated and underlined: "All you can really do is strive to stay out of the cross-fire of competing interests and make yourself as system-independent as possible." AS INDEPENDENT AS POSSIBLE!

Ron Paul to TSA: Stop Irradiating Our Bodies and Fondling Our Children! *LINK*